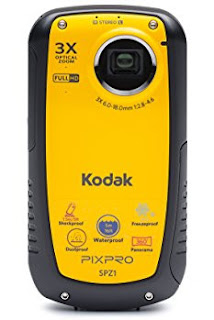 Kodak PixPro SPZ1 Firmware Download. These pocket cameras that had to be held vertically, the pocketbooks, you remember? Kodak yes, since they relaunch the format with the SPZ1. In 2009 and if no one has heard of GoPro, the American company Cisco will experience an ephemeral success in the field of video with its Flip (and its various variations), a camcorder with vertical hand, not too expensive and efficient.

The competition then rushes into the furrow and the stalls end year of 2009 and 2010 are overflowing with these pocket cameras. And then the genre disappears quickly, rolled by the wave \”Smartphone\”. Five years later, Cisco left the field of video to start on the path of network equipment and servers and everyone stopped the production of pocketcams.

Almost everyone, since Kodak, who had taken the leadership of the segment, launched a new model of pocket camera, the PixPro SPZ1. If yesterday\’s Kodak is no longer today\’s Kodak, the brand has retained engineers and know-how and the manufacturing quality of the PixPro SPZ1 is good. I find the grip vertical, the device is waterproof up to 5 m, resistant to shocks and falls (up to 1.5m high) and cold.

A camera of baroude in sum. The video files from the SPZ1 bring us a little back: no wide angle, the frame is even rather narrow and especially the video is not stabilized. As soon as I move a little, the video is degraded. And, worse, the vertical lines are distorted, what is called in the jargon the famous jelly effect.

Faced with some mid-range and high-end smartphones with wide-angle and stabilized optics, the SPZ1 is pale. Its only advantage being its resistance, its price is not so far from entry-level smartphones and its optical zoom is not really usable. Ironically, the worst enemy of the SPZ1 is undoubtedly the Kodak Z1, a cam action good quality, just 90 euros more expensive but filled with features, delivered with a load of accessories and much more powerful video!

The viewing angle is not the same since the SP1 offers an ultra-wide angle when the SPZ1 is narrower, but for action, better a good wide angle. With SPZ1, Kodak just seems to want to fill a commercial niche. Why not, there may be some demand for this.

But if you ask us about his interest, the answer is clear: limited, if not null. The Kodak PixPro SPZ1 is not a bad pocketcam: in its category, it is very suitable. Only it suffers from the faults of the pocketcam genre, obsolete by the performance of current smartphones and the arrival of action cameras not too expensive (like the Kodak SP1!).

Its only assets being the resistance to shocks and water and the moderate price. If the kind of \”vertical handheld pocket camera\” is your thing, the SPZ1 is one of the latest models available. But from a technical point of view (picture quality) and ergonomic, the pocketcam\’s very format has lived.